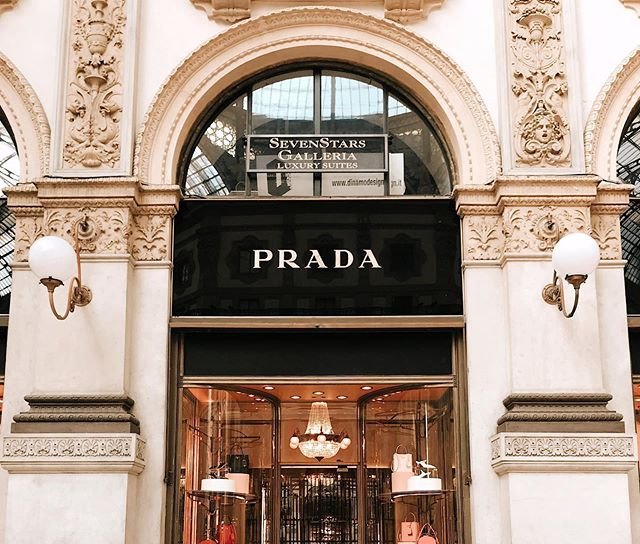 Founded in 1913 by Mario Prada and his brother Martino, Prada is an Italian leather goods brand. As one of the most prestigious brands in fashion, Fratelli Prada, as it was originally called, quickly established itself in the world of luxury fashion. Since its creation, the century-old brand has enjoyed a worldwide reputation in the fashion industry.

The Italian brothers Mario and Martino Prada had the idea of creating one of the largest Italian leather goods shops, but their granddaughter, Miuccia Prada, turned it into a luxury empire. Indeed, one cannot talk about the Prada brand without mentioning the name of the famous fashion designer Miuccia Prada.

Fratelli Prada quickly monopolised the Italian luxury fashion market. It attracted a very high-end clientele and became a fixture in the wardrobes of almost all the women of the Lombardy and European aristocracy. It then became an official supplier to the Italian royal family.

Although the founder of the company wanted to hand over the reins of his empire to his son, the latter was reluctant to take over his father's business. The artisan leatherworker was thus forced to pass the torch to his daughter Luisa. The brand declined for 20 years, only to be revived in the early 1970s.

Born in 1949, Miuccia Prada joined the company in the early 1970s. Although she was not predestined for the world of fashion, the granddaughter of the artisan leatherworker was able to breathe new energy into the brand. She has a passion for fashion and a great artistic sense. Alongside her mother Luisa, she began to design leather goods, which she entrusted to a factory. Without breaking the luxury values of the brand, the designer's style is known to be bold, clean and minimalist.

The young woman met the man who would become her life and work partner in 1977. Patrizio Bertelli shares the management of the brand with his wife, Miuccia Prada. The brand began its rise, thanks to the outstanding talents of the fashion designer and the special talents of her husband's manager.

In 1982, Miuccia Prada launched her first women's shoe collection. In 1985, the designer brought a trendy and relaxed spirit to the label by launching her famous nylon bags or IT bags. Seen as a true innovation in the fashion world, these bags quickly became a must-have in the luxury market. The brand continues to diversify its activities and develops in women's ready-to-wear in 1988. Prada organised its first fashion show at its headquarters. The brand continued in the same vein by launching the Miu Miu collection in 1993, a younger and more affordable line. This whimsical ready-to-wear collection was a hit with starlets and young people. Prada's men's line was launched in 1994. It includes shoes and accessories for men. In 1997, the Italian house launched sportswear creations as well as a line of optical and sunglasses in 2000. The brand continues to develop and diversifies into perfumery. Following the example of other brands, the label launched its first perfumes in 2000. From this new perfume line, the Prada Beauty department was born. Since then, the Italian house has succeeded in conquering the world and the Prada brand has become a true reference in luxury fashion.

In addition to being a true emblem of luxury fashion, Prada continues its expansion into the cultural and artistic field by creating the Fondazione Prada. Reflecting Miuccia's commitment to contemporary art, the Fondazione Prada aims to organise and promote "the most radical intellectual challenges of contemporary art and culture". The brand continues to expand internationally and its hold in luxury fashion eventually inspires author Lauren Weisberger. Weisberger released the novel The Devil Wears Prada in 2003, which later became a successful film.

Prada is nowadays a sure bet. The brand is now present on the red carpet as well as at the most prestigious events. Today, the brand is present in more than 70 countries around the world and has nearly 650 fashion boutiques throughout the world. In 2020, the brand is committed to Unesco thanks to its commitment to the environment. Indeed, the Italian house is releasing an eco-friendly bag collection in 2019 and banning animal fur from its collection.